The hand towels in my powder room were out of control.  They were all over the place.  I don’t have a little towel hanger for them since we demolished the entire bathroom changed things around in there.  Actually, the powder room is in the process of being remodeled.  This has taken an EXTREMELY long time because I haven’t decided what to do with the counter top in there.  I’m seeing all kinds of options but I’m really feeling some teak wood tops I’ve seen lately.

Anyway, I got off topic, the room looks nothing short of jacked up!  The hand towels were just the one thing that put me over the edge.  No way, it wasn’t the fact that I have unsanded dry wall patches.  Or the fact that the faucet is a tarnished brassy color or the fact that the lighting looks like it was pulled out of the Titanic or the fact that the formica counter peeled off and now I have a spongy counter top. I’m not bitter though. (eye twitch)
I’ve got plans, they’re just taking a little longer than I had anticipated.  I decided to be a little proactive though and at least organize those darn hand towels. So here it is.
·       I took a sturdy little box that was in my basement since Nam.
·       I covered that bad boy up with $2.00 worth of burlap fabric.  (I used Elmer’s glue.)
·       I cut the corners to make sharp neat edges and I even covered the bottom and insides like a good little crafter.
·       I made the monogram using a stencil and a paint pen. 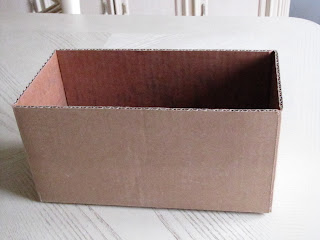 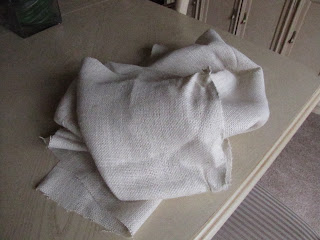 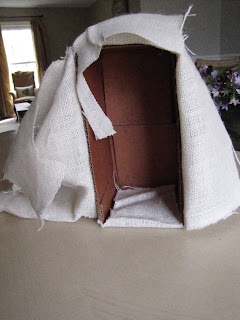 Don't forget to cover the inside.
I love the way this came out.  These are so easy to make.  I think I’ll make more! 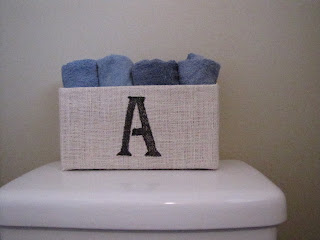