It's A Wrap, Wrap Bracelet

Remember when I told you guys that I made some things successfully for my daughter?  Things such as this.  Well, she's at it again!  Apparently, the Strokes tank top was part of a "look" she was going for.  You see she had this vision all played out in her head.  I won't go into all the details but a bracelet, in her mind, completed the ensemble.  Not just any bracelet though, hers had to be a Chan Luu, which costs about a million dollars!  I kid.  They're actually about $180-$240 which around these parts might as well be a million because they're still just as unaffordable.  MAJOR WALLET THREAT because they are FABULOUS!  What to do?  What to do?  Well, I'll tell you what I did. I searched out a wrap bracelet tutorial and got to WORK!  That's what I did.

Now... providing you with a tutorial on this site would've been nice of me, but I never claimed to be nice and frankly giving an entire tutorial on how to make this bracelet sounds about as exciting to me as unflavored jello for dessert.  Besides this video tutorial is SOOOO MUCH BETTER than anything I could ever explain. 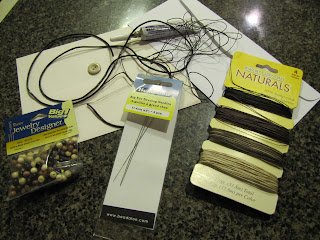 I had these supplies on hand already.  I just bought beads.
This project was so easy and cheap that I ended up making two!  Here's the one I made for my kiddo.  So Hawt!!!  It's very beachy, bohemian! 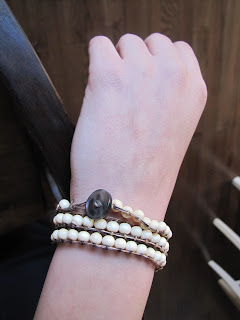 Isn't she precious?!
Check out the video tutorial.  It's super easy to follow!