Seed Tape To Get Your Spring Sprung

I’ve come to the realization that I AM LAZY!  I usually blame my slothfulness on Winter Blues but let’s face it I’m lazy year round.  I’m lazy inside the house and out.  Sure I have my spurts of energy but those max out at about an hour; after that I’m useless.
There is no situation though that makes me feel lazier than having to work outdoors, specifically planting and tending a garden.  That crap is back breaking work!  I’m talking major buns and thighs workout.
Every year I plan a garden and every year I fail miserably.  It’s what I’m becoming known for.  Case in point: One year I tried growing pumpkins and all I grew were some brown mucky vines!  That same year my bratty younger brother kicked a rotten pumpkin in my yard and every place those darn seeds landed a gorgeous pumpkin grew.  What the heck?!  He made no effort at all!  My husband took great pleasure in this and teased me about it for a LONG time.  The major reason I'm no good at growing things is because the hard work turns me off.  My failure as a farmer/gardener is my motivation for this project here.
A couple of years ago, Martha Stewart Living magazine featured a small tutorial on seed tape.  I thought this was ingenious but I kept forgetting to try it.  So this year is the year I WILL have a garden!  As God is my witness I shall never go flowerless again!  (Picture Scarlett O’Hara in a barren field shaking her fists at the sky.)
Martha’s tutorial used paper towels.  I took her basic idea and tweaked it to my needs.  I decided to use toilet paper instead because I figured the tissue would break down quicker than the towels. 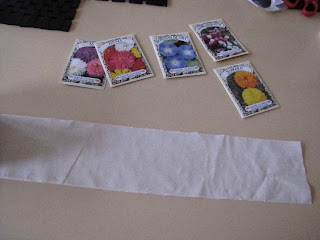 I placed a tiny (I mean tiny, people, because toilet paper is thin) dab of Elmer’s glue spaced out according to the seed spacing recommendations on the seed packet.  I used a lollipop stick with a damp end to pick up each tiny seed and place it on the spot of glue.  It’s important that you use non-toxic water soluble glue so that your seeds can sprout. 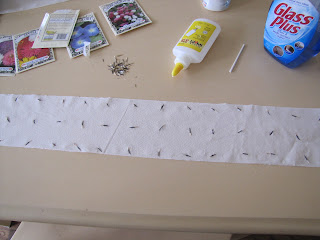 The all surface cleaner is for the removal of evidence.  My husband got mad because there were glue dots everywhere!
Once I had all my little seeds in place, I laid out the strips to dry.  When these are dried, you can go ahead and fold them up and store them with the original seed packet so you can refer to it.  When you go to plant these, all you have to do is set the seed tape down, cover it with soil, then water and watch it grow. 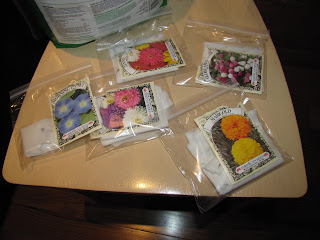 I also made some for the veggies I'll be growing.  8) Hopefully!
I can’t wait for spring!  I’m chomping at the bit!  This time I’m ready!  Best of all, all my little plants will be growing in a nice, neat line!  This will make it easier to weed and take care of, making me look less lazy.  Shoot, people might even think I placed them in the ground like that.  I’ll post about this again when I’m ready to plant and then again when they’re in bloom.
I’m keeping my fingers crossed.
Nydia 8)﻿
Posted by Unknown at 1:19 PM