A Corded Pillow According To Me

It’s no secret around these parts that I can’t sew.  Does that stop me?  Heck no!  I press on-no pun intended.  Since straight lines are possible even for the most sewing challenged individuals, that’s what I do.  I sew straight lines that eventually become pillows.
After making about one thousand pillows, I felt like I needed a challenge.  I was now ready for –gasp-cording!
Cording is one of those things that makes a sewing novice look like a darn (there I go again with the puns) pro.  The secret is, it’s kind of easy.  Ok maybe not ABC/123 easy, but certainly doable if you have opposable thumbs.
The actual making of the cording involves a special tool: you need a zipper attachment.  Mine cost about $3.50.  Not a bad price to pay for a tool that makes you look like a couture seamstress. (Slight exaggeration maybe.)  I plan on using this puppy for years of sewing pleasure and goodness.  Oh did I mention it sews zippers?
Yeah so like I was saying, I wanted to add some pizazz to my pillows by adding cording and decided to give it a shot.  I had some rope lying around the house, probably left over from something my husband had tied up.  (lol sounds incriminating) I used this rope and wrapped it in some white denim type fabric; then sewed along the edge to make cording.  That’s it; done; easy.  Oh by the way, I cut the fabric strip to be about 3 inches wide.  This provided me with more than enough fabric to wrap around the rope and leave me a seam allowance. 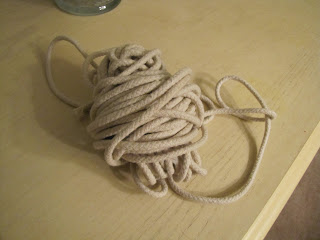 Exhibit A
I had measured the perimeter of the pillow I was going to prettify and I sewed a long strip of cording accordingly. (Did you catch the play on words there?  I crack myself up!) 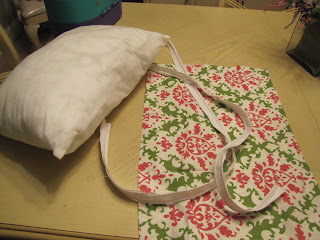 After the cording was sewn, I sandwiched that between the two pieces of fabric that were about to become my fancy new pillow.  I pinned all this material together and sewed it up to an inch before reaching the corners. 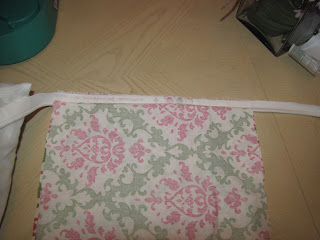 Ah the corners, the tricky wrench messing up the works.  Those corners were devilish- I had another choice word but some of you might have fainted. The corners needed to be rounded slightly without causing the needle to slip or the fabric to bunch.  I seriously had to pray about it.  I suggest you play with it a little as you maneuver the cording around corners.  (Either that or have a tall glass of wine next to you to ease your nerves.)  Once you’ve sewn almost all the way around the pillow-remember you’ll need to leave yourself some space to stuff a pillow form into it- you’ll turn the whole thing inside out.

At that point you can stuff your pillow and begin the process of wishing you were never born closing up the gap and connecting the two pieces of cording.  First things first, you need to expose some of that rope and cut it so you have a little fabric left to wrap over the other end of the cord.  This will make it look finished.  To close the hole you could glue the seams together with fabric glue or you can hand stitch it.  I went with hand stitching because I’m an expert on padded cells I forgot I had fabric glue.
Let me just warn that the addition of cording might elicit some responses you weren’t expecting such as a compliment, from a husband and or teen, on your sewing skills or the sudden misconception that you now have the sewing ability to make slip covers and crap like that for people.  Tread lightly on this one my friends. 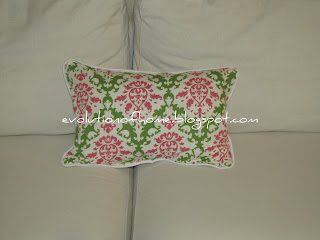 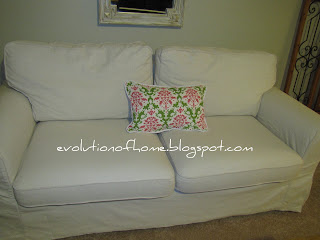