Last week I was thumbing through a Ballard Designs catalog and I happened across this picture of some pears.  Super Fab no?  I thought they were delightful and since I'm a pro (hardly) at paper mache (remember the Achey Breaky Heart?), I thought I would try my hand at making them.  I must have bumped my head to think about taking on this type of project again!  I do have to say though that the second time around it was easier.  I guess that horrific first experience served for something. I made this using garbage!

First thing I did was find somethings that were similar in shape.  For this I used a couple of empty plastic containers straight out of the recycling bin.  One was an oil container in its past life the other was diswashing liquid.  Yea repurposing is fun!  I'm a true environMENTAList!  I wrapped these bottles all up in newspaper to make a pear shape and I taped the crap out of them.  On the one bottle I ran out of paper so I used plastic bags. 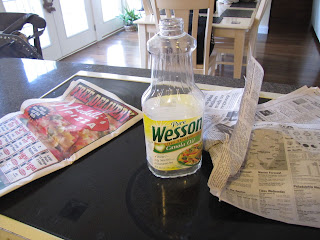 For the bigger pear. 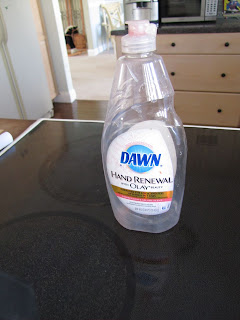 For the slightly smaller pear. 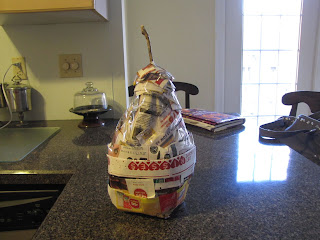 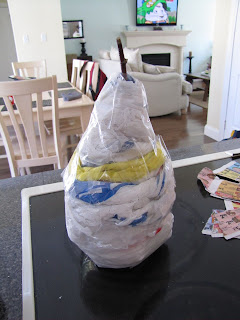 Once I had a pear shape I liked, I went ahead and shredded some newspaper and mixed my paper mache paste.  I placed the wet sticky strips all over the pear.  (Oh I should add that the stems are twigs from my yard.  I just stuck them in the holes of the container and secured them.)  As soon as I had a satisfactory level of bottle mummification, I set these puppies out to dry. 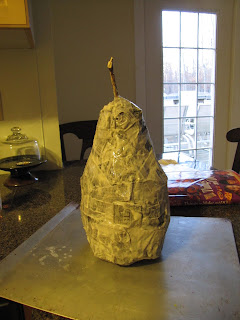 I learned my lesson from the last paper mache project I worked on.  This time I used small dabs of hot glue sporadically to secure the jute twine and attached the rest of the twine using Elmer's glue.  This simple change made things so much neater and faster!  I can't even begin to tell you what a difference that made time wise.  I wrapped the twine carefully around the two beasts making sure all the seams were covered up nicely.

Once they were covered and the glue had dried, I was done and my pears were ready for display.  What do you think?  Not quite Ballard Designs but certainly not $88!  These, my little Evolutionites, were absolutely FREE!

The student has become the master.  I am officially the Bruce Lee of paper mache!  (In my mind.)